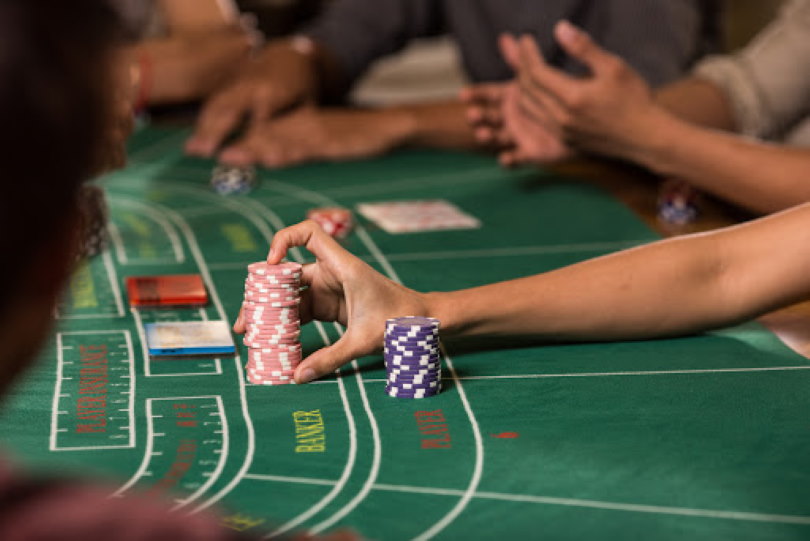 This article looks at the different versions of Baccarat, how to play, and what the odds are of you winning!

Baccarat is an fun game of cards from the countries of Europe. The term “baccarat” means zero in both Italian and French. The game like many others has its own history. While some believe that Baccarat is an Italian product, others hold France as its motherland.

Initially the game was plated with a tarot card deck. It gradually became the favorite of the high-class French society people from where its slightly modified form got its name as ‘Chemin de Fer’. After this the game made its way to the land of England and from there to the American soil.

There are four types of Baccarat played today:

The best part is that all the four forms of the game have single vocabulary and playing objectives. There are two types of Baccarat tables- mini table and traditional Baccarat table. The two tables differ in size, the number of players that can play as well as the manner in which markings and labeling done on them.

Next comes the card values where only aces are counted as one, all tens and faces are worthless-of zero value. Suits are insignificant here. The value of cards is first added and then the first digit is removed or dropped. So a total of 12 will be counted as 2, leaving the digit 1. In the game of Baccarat, which is most often known as the game of chance, there are only three options to wager. These are- banker wins, player wins or a tie case.

There are more than one card decks used for this game. This always keeps one in a quandary as to who will emerge as the lucky winner. The best a player can do to win this game is to evaluate the number of odds. The odds break down is in the following way- Bank- 1.01% house edge, Player-1.29 % house edge, Tie-15.75% house edge. These figures are an outcome of the drawing rules that are made to produce these results.

The number of decks used is also a considerable factor in winning the bet. For say if 6 decks are used then the chances of bank winning to the player are more. In the widespread American Baccarat either 6 or 8 decks are used. It requires three dealers and the main dealer is called the ‘croupier’.

The shuffling of cards is the onus of the house dealer while the placement of cards in the shoe and handling it to the first player is the task of the croupier. If a player is disinterested in dealing, he may pass on the shoe, which rotates counterclockwise to the direction of the table to another player.

The betting in baccarat is to be done before the dealing of each hand. After this the croupier deals four down faced cards. The one who has made the largest bet on the ‘player’ gets the first opportunity to see the player’s hand. If there is an eight or nine – a ‘natural’ on any of the two hands, that player wins, the round comes to an end. If both cards are the same, it’s a tie case and if both hands are naturals, 9 outweigh the 8.

So if you have spare money and time and you are also confident of your luck, try the game of Baccarat …who knows… it may bring a wonderful fortune!