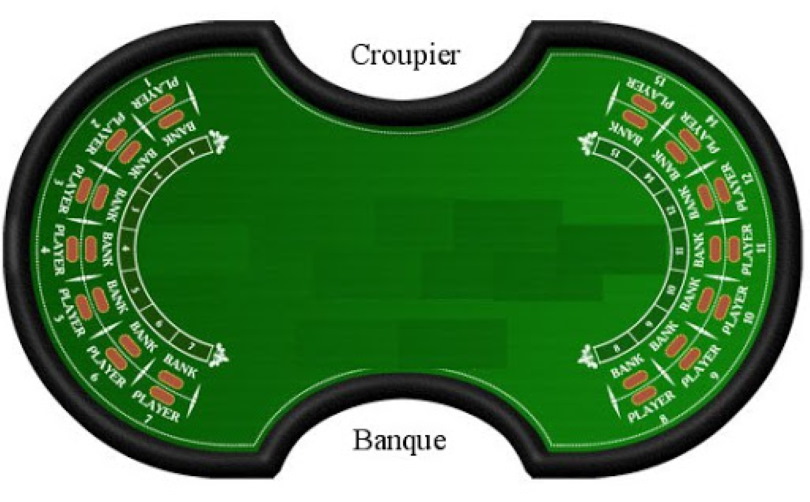 This article is about the card game called Baccarat Banque.

In Baccarat Chemin de Fer a given bank only continues so long as the banker wins. So soon as he loses, it passes to another player. In Baccarat Banque the position of banker is much more permanent. Three packs of cards are shuffled together. (The number is not absolute, sometimes four packs, sometimes two only, being used; but three is the more usual number.) The banker (unless he retires either of his own free will or by reason of the exhaustion of his finances) holds office until all these cards have been dealt.

The bank in Baccarat Banque

The bank is at the outset put up to auction, i.e. belongs to the player who will undertake to risk the largest amount. In some circles, the person who has first set down his name on the list of players has the right to hold the first bank, risking such amount as he may think proper.

The right to begin having been ascertained, the banker takes his place midway down one of the sides of an oval table, the croupier facing him, with the waste-basket between. On either side the banker are the punters (ten such constituting a full table). Any other persons desiring to take part remain standing, and can only play in the event of the amount in the bank for the time being not being covered by the seated players.

The croupier, having shuffled the cards, hands them for the same purpose to the players to the right and left of him, the banker being entitled to shuffle them last, and to select the person by whom they shall be cut. Each punter having made his stake, the banker deals three cards, the first to the player on his right, the second to the player on his left, and the third to himself; then three more in like manner. The five punters on the right (and any bystanders staking with them) win or lose by the cards dealt to that side; the five others by the cards dealt to the left side. The rules as to turning up with eight or nine, offering and accepting cards, and so on, are the same as at Baccarat Chemin de Fer.

Each punter continues to hold the cards for his side so long as he wins. If he loses, the next hand is dealt to the player next following him in rotation.

Hands and playstyles in Baccarat Banque

Any player may “go bank,” the first claim to do so belonging to the punter immediately on the right of the banker; the next to the player on his left, and so on alternatively in regular order. If two players on opposite sides desire to “go bank,” they go half shares.

A player going bank may either do so on a single hand, in the ordinary course, or a cheval, i.e. on two hands separately, one-half of the stake being played upon each hand. A player going bank and losing may, again go bank; and if he again loses, may go bank a third time, but not further.

A player undertaking to hold the bank must play out one hand, but may retire at anytime afterwards. On retiring, he is bound to state the amount with which he retires. It is then open to any other player (in order of rotation) to continue the bank, starting with the same amount, and dealing from the remainder of the pack, used by his predecessor. The outgoing banker takes the place previously occupied by his successor.

The breaking of the bank does not deprive the banker of the right to continue, provided that he has funds with which to replenish it, up to the agreed minimum.

Should the stakes of the punters exceed the amount for, the time being in the bank, the banker is not responsible for the amount of such excess. In the event of his losing, the croupier pays the punters in order of rotation, so far as the funds in the bank will extend; beyond this, they have no claim. The banker, may, however, in such a case, instead of resting on his right, declare the stakes accepted, forthwith putting up the needful funds to meet them. In such event the bank thenceforth becomes unlimited, and the banker must hold all stakes (to whatever amount) offered on any subsequent hand, or give up the bank.

The laws of baccarat are complicated and no one code is accepted as authoritative, the different clubs make their own rules.