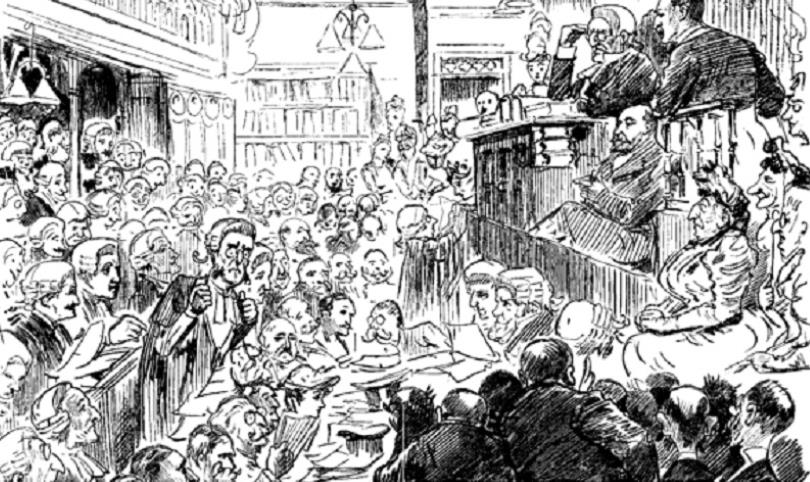 The Royal Baccaret Scandal, also known as the Tranby Croft scandal was an English gambling scandal of 1890 that notoriously involved the future King Edward VII.

On September 8, 1890, Sir William Gordon-Cumming, 4th Baronet and the Prince were among the guests at Tranby Croft, the home of shipbuilder Sir Arthur Wilson. That evening the guests played baccarat, a gambling game which was illegal in England but was a favourite of the Prince.

During the evening, several players observed Sir William apparently cheating by altering the amount of the bets he had on the table after he won or lost a hand. Alerted to this, they watched him more closely the next evening and confirmed his actions. Sir William won a total of £228 during the two days of playing.

On the morning of September 10, six of the guests conferred as to what they should do about Sir William’s behaviour. They decided to inform the Prince and to confront Sir William. Sir William denied any wrong-doing but finally agreed to sign a pledge that he would never play cards again in exchange for an agreement that the matter would be kept secret.

The matter however did not remain secret and quickly became common knowledge throughout the social circles that Sir William inhabited. It was commonly believed that one of the people spreading the tale was Lady Daisy Brook, a notorious gossip (known by the nickname “Babbling Brook”) and the Prince of Wales’ current mistress. Sir William found himself ostracized from society.Sir William decided to defend his reputation by suing his original accusers in civil court.

The defendants were George Loms, Lycett Green and his wife, Berkeley Levett, Arthur Wilson (Sir Arthur’s son) and his wife, George Coventry, 9th Earl of Coventry, and Lord Somerset. The Prince was not named as a defendant but he was called as a witness.

The suit, Gordon-Cumming v. Wilson and Others, made the incident public knowledge where it became known as the Royal Baccarat Scandal or the Tranby Croft Scandal. Sir William was represented by Sir Edward Clarke, one of England’s most talented solicitors and the defence was represented by Sir Charles Russell. The trial was heard by the Lord Chief Justice John Duke Coleridge, 1st Baron Coleridge and began on June 1, 1891.

The Prince of Wales was of course reluctant to testify as a witness in such a case. He had been called to appear as a witness once before, in an adultery case in 1870 where he denied having an affair with Lady Mordaunt. But his testimony was compelled when Sir Edward invoked Article 42 of the Queen’s Army Regulations that as an officer, the Prince had been required to report the illegal action of Sir William, another officer.

Sir Edward forced the Prince to admit he had not done so and to acknowledge his own participation in the evening’s events. But while Sir Edward performed well, he was unable to overcome the testimony of the defendants as to what they had witnessed as well as the evidence of Sir William’s signed confession (which he now stated he had only signed to prevent involving the Prince in a public scandal). The trial ended on June 9 and the jury deliberated for only ten minutes before finding in favour of the defendants.

Sir William was dismissed from the army and retired to his Scottish estate. He never re-entered high society and remained bitter about the incident until his death years later. One happy note was that his fiancée, American heiress Florence Garner, supported him throughout the scandal.

The couple wed the day after the trial ended and went on to have four children. Following the trial, the Prince of Wales changed his behaviour to some extent. While he continued to gamble, he did so in a more discreet manner and ceased playing baccarat. He also dropped Daisy Brook and replaced her with a new mistress, Alice Keppel.