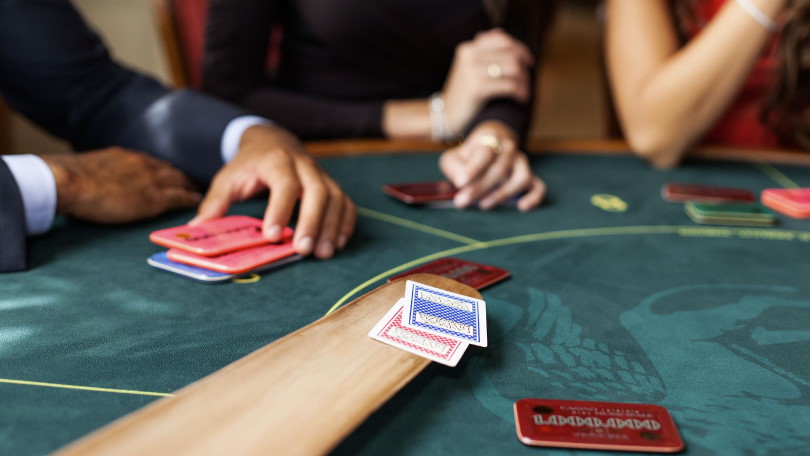 A beginner’s guide to playing the Chemin de Fer version of baccarat.

One of the many forms of the game of Baccarat is the French version called Chemin De Fer. In this version of the game six full packs of cards of the same pattern are used, shuffled together. The players are seated around the table which features a basket on the center for reception of used cards. The cards are shuffled by the Croupier and then the cards are passed on with each player having the right to shuffle in turn. Once the tables have been passed to every player at the table the Croupier once again shuffles the deck and then offers the cards to the player to his left, who then cuts the cards.

The dealer in Chemin De Fer

The dealer places before him the amount he is disposed to risk and the players ‘make their stakes.’ Any player, beginning with the player on the immediate right of the dealer, is entitled to say ‘Banco’, meaning to ‘go bank,’ to play against the whole of the bankers stake.

If no one does so, each player places his stake before him. If the total so staked by the seated players is not equal to the amount for the time being in the bank, other persons standing round may stake in addition.

If it is more than equal to the amount in the bank, the players nearest in order to the banker have the preference up to such amount, the banker having the right to decline any stake in excess of that limit.

The banker proceeds to deal four cards face downwards: the first, for the players, to the right; the second to himself; the third for the players, the fourth to himself. The player who has the highest stake represents the other players. If two players are equal in this respect, the player first in rotation has the preference.

Each then looks at his cards. If he finds that they make a natural nine, the highest point at Baccarat, or eight, the next highest, he turns them up, announcing the number aloud, and the hand is at an end. If the bankers point is the better, the stakes of the player become the property of the bank. If the players point is the better, the banker (or the croupier for him) pays each player the amount of his stake.

The stakes are made afresh, and the game proceeds. If the banker has been the winner, he deals again. If otherwise, the cards are passed to the player next in order, who thereupon becomes banker in his turn.