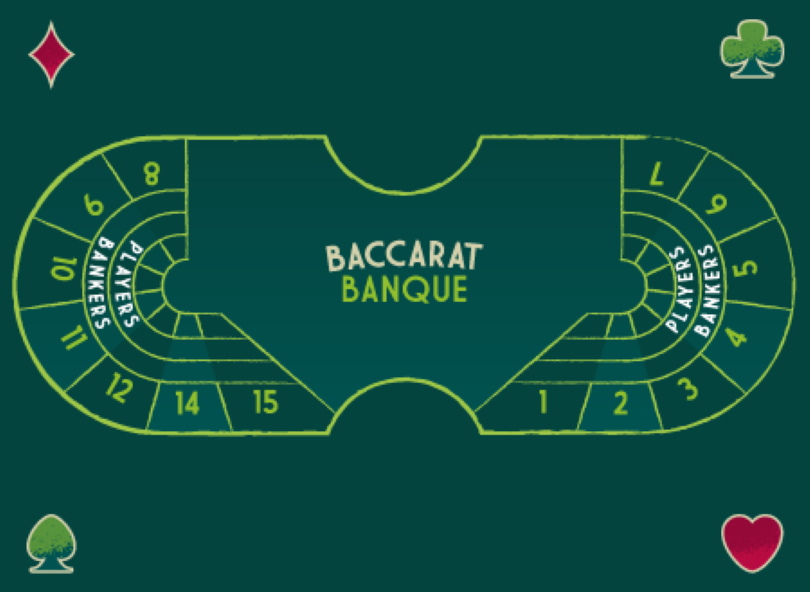 How to play this variation of the game of Baccarat.

Bacarrat Banque is yet another variation of the pure game of Baccarat. Three packs of cards are shuffled together. The bank is at the outset put up to auction. In some circles, the person who has first set down his name on the list of players has the right to hold the first bank, risking such amount as he may think proper.

The right to begin having been ascertained, the banker takes his place midway down one of the sides of an oval table, the croupier facing him, with the waste-basket between. On either side the banker are the punters (ten such constituting a full table). Any other persons desiring to take part remain standing, and can only play in the event of the amount in the bank for the time being not being covered by the seated players.

The croupier in Baccarat Banque

The croupier, having shuffled the cards, hands them for the same purpose to the players to the right and left of him, the banker being entitled to shuffle them last, and to select the person by whom they shall be cut.

The breaking of the bank does not deprive the banker of the right to continue, provided that he has funds with which to replenish it, up to the agreed minimum.

Should the stakes of the punters exceed the amount for, the time being in the bank, the banker is not responsible for the amount of such excess. In the event of his losing, the croupier pays the punters in order of rotation, so far as the funds in the bank will extend; beyond this, they have no claim.

The banker in Baccarat Banque

The banker, may, however, in such a case, instead of resting on his right, declare the stakes accepted, forthwith putting up the needful funds to meet them. In such event the bank thenceforth becomes unlimited, and the banker must hold all stakes offered on any subsequent hand, or give up the bank.